(See the separate info About Elementals, for a complete description of Elementals).
Every dragon has some level of each Elemental trait: Air, Earth, Water, Fire, Celestial, Void, Lightning.
Elementals do not have Visible and Hidden values; only the values that register above Normal are displayed.
The highest displayed Elemental value is called the Major Elemental. If a dragon’s Major Elemental is Air,
for example, we’ll refer to it as “Major:Air” as a form of notation.
Why is this important? Well… it’s about Elemental Dominance. There is a nice graphic image that explains how this
works as a “wheel”: 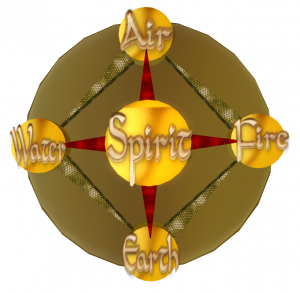 Elemental Dominance means that the traits and all the stats of the dragon are slightly more of an influence in a mating.
Normally, you’d think of the traits coming from the male and female as being of a 50%/50% weight… but if one parent is
Elementally Dominant over the other, then the Dominant parent’s traits and other stats have slightly more influence.
This is separate and in addition to other weightings, such as which trait is stronger.
Consider a mating where the 4 breeds involved: Male Visible, Male Hidden, Female Visible, Female Hidden – all have the same strength.
If there was a breeding without Elemental Dominance, then you can expect that over time, to see about 25% (1 in 4) of the time you’d
get a specific breed to come through as the offspring’s Visible Breed. With Elemental dominance, you’ll see a slightly greater chance of the Visible and Hidden Breeds from the Elementally Dominant parent, coming through. Let’s run through some numbers, as an example:

If the Male was Fire, and the Female was Water, the Female would be the Elementally Dominant parent, in this mating.
So… instead of weighing each Breed value at 25% chance, you’d see something more along the lines of this:
Female Visible:30% Female Hidden:30% Male Visible:20% Male Hidden:20%

There is still a random factor… it’s like throwing dice. It’s possible, but not likely, that you’ll get the same thing come through many times in a row.
Over large numbers of matings, you’ll see this sort of percentage distribution show up. In the Lab, we test new dragon matings with 100,000 matings, to check the statistical percentages, and confirm that the number are coming through as they are supposed to be.

How does Elemental Dominance affect the Elemental values, themselves, where there is no Hidden/Visible traits?

Well, normally the value of an offspring’s Elemental (e.g. Air) starts off at the average of the parent’s values, and then a range of possible values (from below that, to above that) is chosen… and a random choice is made within that range. So, let’s walk through an example of that:

Normally the offspring’s Air would be in a range from below to above 1.3739 (the average).

In the numbers above, the center point of the range for the random choice would be BELOW 1.3739, since the Male has more influence.
(Please re-read the last few sentences over and over, until it’s clear :).

We are an avid bunch of virtual dragon and kitsune breeders in Second Life – Come join us!